It’s no secret that teenagers are moody. Their mood swings can be caused by stress, problems at home, self- loathing, or peer pressure from classmates. The reasons are endless, but the reality is simple: If your teenager’s mood swings go beyond what is considered normal, they could suffer from an emotional disorder. One of the most common emotional issues suffered by teenagers is depression.

Depression can lead to harmful effects on an individual, ranging from cutting themselves to even committing suicide, so it’s important to find help. In order to spot a depressed teenager, it crucial to first understand the issue. 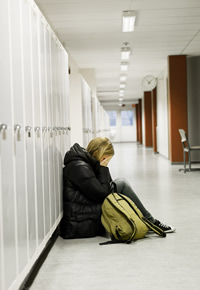 Spotting a troubled teen is not always the easiest task, especially because many teenagers like to hide their feelings and emotions. There are many signs that point to a troubled teen, though, including the following:

Depression can lead to more than just mood swings in a teenager. There are many effects of depression that cause emotional pain to the individual. Depression’s tendency to cause fatigue and difficulty concentrating, for example, can affect a teen’s school performance with poor attendance, lower grades, or frustration with schoolwork.

Depression can also encourage teenagers to engage in risky behaviors, such as shoplifting or running away, both of which may be attempts to seek attention and cry for help.  The emotional disorder can also prompt teens to try drugs, alcohol, or other types of self-destructive or illegal behavior. Unfortunately, the law does not look favorably upon those who break it – even if the teenager’s actions were caused by depression -, so it’s important to catch depression early on, before these types of dangerous behaviors have time to develop.

Low self- esteem is also a side effect of depression, and this often brings feelings of shame, failure, unworthiness, and unattractiveness. Violence is another dangerous effect of depression, one that often manifests itself in the form of self-hatred or self-injury, bullying, or even suicide. The effects of depression are severe, so it is important to catch them early before anyone gets hurt.

Troubled teenagers need help and assistance. At this low point in their life, it is hard for them to help themselves or realize that they even need help. Offer support to a depressed teenager by listening and letting them express their feelings without judgement. Avoid asking too many questions, this could cause the teen to feel patronized or crowded.

Teenagers often shut the important people in their life out, and in order to communicate with them, you’ll need to be both gentle and persistent. Always validate the feelings of the teen, and even if their concerns seem silly or irrational, continue to be supportive and to acknowledge the perceived seriousness of the issue. If your research or your intuition tells you that a teen needs additional help, do not hesitate to help them find it.  Counselors, parents, and therapists are all great resources for helping depressed teens. Depression can be treated, often quite successfully.  So if you care about a depressed person, it’s important to find them the help they need.