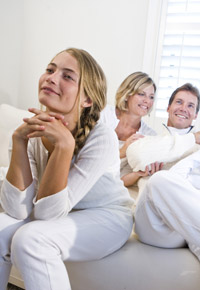 Many teenagers love to watch television. Since the invention of television in 1926, television has brought billions of minutes of programming to living rooms all over the world, and it’s almost too easy to be a couch potato for hours with the amount of television available today. Televisions can be a reliable source of information and education; however, television can also expose teenagers to violence and intense images that can be detrimental to their emotional well-being. It is important to know what your teen is viewing on television in order to understand the negative effects and the positive effects of this technology.

Televisions can give teenagers unhealthy, false, and negative messages. As a teenager is maturing into a young adult, these messages can result in confusion, stress, and other negative effects. Television can expose teenagers to violence, sexuality, stereotypes, and lifestyle habits, which can impact the way that teens react to the world around them. For example, typically, teenagers who watch violence on television are more likely to participate in aggressive acts, become less sensitive to pain, and become fearful of the world around them. Furthermore, weapons are often shown as attractive on television, while guilt and remorse are usually absent.

Sex is also used on television to sell products, shows, and ideas, and TV often glorifies sex.  Television’s portrayal of sex and sexual acts may have a definite impact on your teen’s perceptions of sex, and those perceptions could differ drastically from your family’s beliefs.

Stereotypes are also present in television based on race, gender, age, and physical beauty, and teenagers can adapt their values to fit the values of these stereotypes. Lifestyle habits such as obesity, smoking, alcohol use, and risk-taking may be promoted through television. The more a teenager is exposed to these bad habits (whether through television or real life), the more likely they could be to try them.

Finally, television can also allow a teenager to tune others out and escape from the real world, causing the teenager to actually miss out on real-world experiences. For many troubled teenagers, television acts as a “quick fix” from the real world by providing false scenarios, quick answers, and rapid rewards.  This can have a very real impact on a teenager’s emotional and social development.

When appropriate television is viewed, it can have multiple positive impacts on the teenager. Television can help the teen to build and develop imaginary skills and role playing ideas. Teenagers can adopt and copy the behaviors they witness on television, and when these behaviors are rewarded on television, teenagers see them as positive and something they would like to model.

Family values can also be exemplified through television viewing, as can positive behavior, morals, and decision-making skills. This type of television, which shows individuals being rewarded for good behavior, can help the teenager develop good habits.

Monitoring your son or daughter’s television habits and encouraging them to watch age appropriate programming can have positive effects on your teenager by promoting healthy and positive behaviors.

Television can drastically impact a teenager’s maturity and growth, and it is important to monitor what a teenager watches on television, as it can have positive and negative effects on them. Communicating with a teenager about what they watch is key to understanding what is going through their head.