Arguably the quintessential article of clothing associated with women’s fashion is the Little Black Dress. In fact, this piece is so iconic that it can be referred to by its monogram: LBD. This iconic piece was popularized by designer Coco Chanel, who identified it as “the shape of the future” when a drawing of an early Chanel version of the dress was published in Vogue magazine. The year was 1926, and the elegant black long-sleeved sheath was pictured paired with a classic white pearl necklace. Standing in stark contrast with the much more ostentatious styles of the era, the simple beauty of the LBD stood out as chic and stylish. The Vogue article “aligned Chanel’s creation with the any-color-as-long-as-it-is-black model-T Ford car.” While each decade has enjoyed its own take on this classic piece, a few basic requirements to the uniform remain.

History of the Little Black Dress

According to the well-researched article, “The Colorful History of the Little Black Dress,” published in the New York Times in 2013, there’s plenty of legendary significance associated with this famed frock. Despite the French designer’s origination of the LBD, its popularization might well be credited to American media — including both the American magazine article cited above and the 1961 movie “Breakfast at Tiffany’s.” In the silver screen classic, Hollywood favorite Audrey Hepburn’s LBD was made by a French designer other than Chanel; designed by Parisian Hubert de Givenchy, Hepburn’s dress is thought of by many as the epitome of the LBD.

Celebration of the Little Black Dress

In a 2013 exhibition at the Parisian Mona Bismarck American Center for Art & Culture, a wide range of designers’ renditions of the LBD were on display, including American and Japanese designers and styles ranging from sleek to lacy.

The exhibition, created at Georgia’s Savannah College of Art and Design (or SCAD) pairs extremely diverse examples with one another: consider a Lagerfeld take on the classic Chanel dress next to a Kamali cutaway Latex design, each standing out in its own unique way against the bright red walls.

Timelessness of the Little Black Dress

Informed by years of advising socialites ranging from Diana Ross to Gwyneth Paltrow along with attending haute couture shows, Mr. Leon Talley, the one at SCAD who orchestrated the LBD exhibit, is a firm believer in the power of the little black dress. Relied on as both “the last haven for a conventional dresser” and “an opportunity to add a jolt of imagination to a classic,” Ms. McCartney describes the LBD as more than simply an article of clothing: “The little black dress is something to rely on — to fill you with confidence and ease.”

Miuccia Prada describes its significance: “To me, designing a little black dress is trying to express in a simple, banal object, a great complexity about women, aesthetics, and current times.”

Whether you’re shopping for a little black dress or another masterpiece by famed designers such as Prada, Chanel, or Givenchy, the Penny Pincher Boutique is just the place to find your next high-fashion piece! 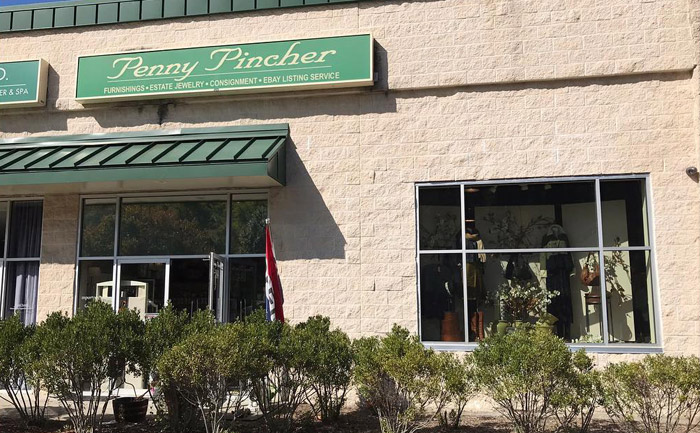 We’re Westchester’s luxury consignment shop offering women’s designer clothing, jewelry, shoes, handbags and much more. Visit our shop at 184 Harris Road in Bedford Hills, New York or visit us online at www.pennypincherboutique.com. You can also find a selection of our items on sale on eBay. We ship throughout the United States.

Images in this blog post are taken from the Penny Pincher Boutique Instagram page. Images represent items which may already have been sold.